Dan Burton, Associate Minister, has been on staff at LifeSpring in some capacity since 2003. In addition to his current position, he has served as Discipleship Minister and on the Teaching Team. Dan believes that his job fits his passion and gift mix for ministry. He is energized by his role. “The church is family to me and my family. We’ve been here for a long time, and it is a privilege to serve the people you love,” he said.

Dan has degrees from Michigan State University and Cincinnati Christian University (CCU). His other jobs have included bagger, campus minister, missionary to Ethiopia, and Campus Minister and Dean of Men at CCU.

Dan and his wife Sue have three sons and two dogs. He enjoys exercising, spending time with friends, playing with his dogs and putzing around the house on different projects. 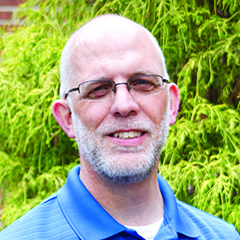