Matt is a 5th grade math and science teacher at Winton Woods Intermediate School. He and his wife, Sandra, first visited Lifespring in 2001 while they were both attending the University of Cincinnati. They were married here in 2004. The Georges have two children, Jason and Karah.

In 2004, Matt and Sandra were part of the Launch Team for the former Westside location. Currently, Matt serves as a Large Group Storyteller in the Elementary Lifespring Kids program and leads an adult Small Group. He said he took his time getting involved in Lifespring at first because he wanted make sure God using him in a way that was consistent with His plan. While Matt will continue to teach in Children’s Ministry—where he has served since 2012—he said is also spiritually ready for his “next best step”. This is his first year as an elder. 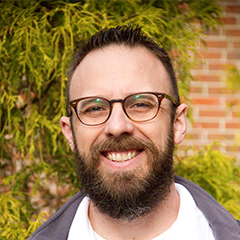